On my second day in the Chi, I woke up hungover.

I made it to the Architecture tour with Lexi and Carms and was thrilled to learn about Chicago.

Except I ONLY learned about the buildings, rather than the city.

I was so hungover and bored of hearing about the limestone, and windows and thought things were going to take a turn for the worse.

I remember sitting there and thinking, “If I throw up, it will make a great blog post.”

It was 1000 degrees, and at one point I was so delirious and hot that I made a make shift hat out of a map.

After an hour and a half, we got off the boat, and into Nomie Restaurant.

Later, Carms and I stopped by the John Hancock Building.

The last time I was in Chicago, I had visited the Signature Room which is the restaurant at the top. I thought that because the last time I had been there it had been stormy and dark, that I would be fine going again with Carms.

I have a fear of elevators and was a little uneasy as we soared to the 94th floor.

I got up there, and it felt like the building was swaying.

It was actually so pathetic. I found a place to sit that did not face  the floor to ceiling windows.

I asked one of the people if he felt like the building was swaying.

“Maybe you have vertigo.”

We decided to stop by a rooftop bar that our concierge had recommended.

And it was incredible.

There was a line outside the hotel, kind of like a club.

Carms does not wait in lines.

Eventually we got in, and went up the elevator to this beautiful room and patio called Drumbar. 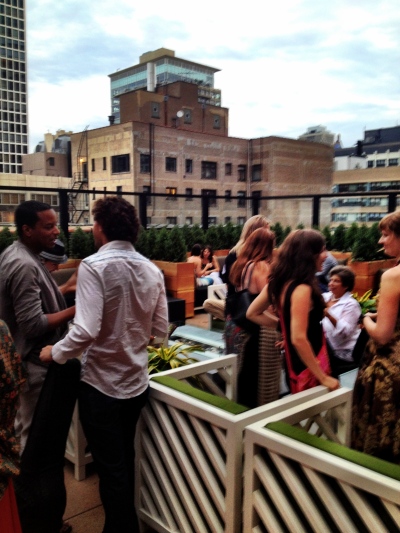 Carms was pissed as was I, that we could not sit outside, because the only way you could sit on the patio is if you had ordered bottle service…

Overall it was beautiful, and if there hadn’t been bottle service it would have been perfect.

We enjoyed a fab dinner at mercaditio, attempted to go to the doughnut vault (which was ‘sold out’) then went back to our hotel for drinks and dessert.

While we were enjoying the bar Carms ran into one of her old ABC friends who told her she had been at a benefit Reese Witherspoon was hosting at our hotel.

Turns out 20 minutes before we were at the bar, Steven Tyler had been hanging out there.