We grabbed our pastries and set off for the Marais.

This is what used to be the Jewish Quarter of Paris.

If I could live anywhere it would be in the Marais.

Everyone is fashionable and the streets are lined with fabulous boutiques.

When you go here, you have to get a falafel.

We waited in line at a place called Chez Mezzane. I went in to get my ticket for my falafel and who is standing right next to me? 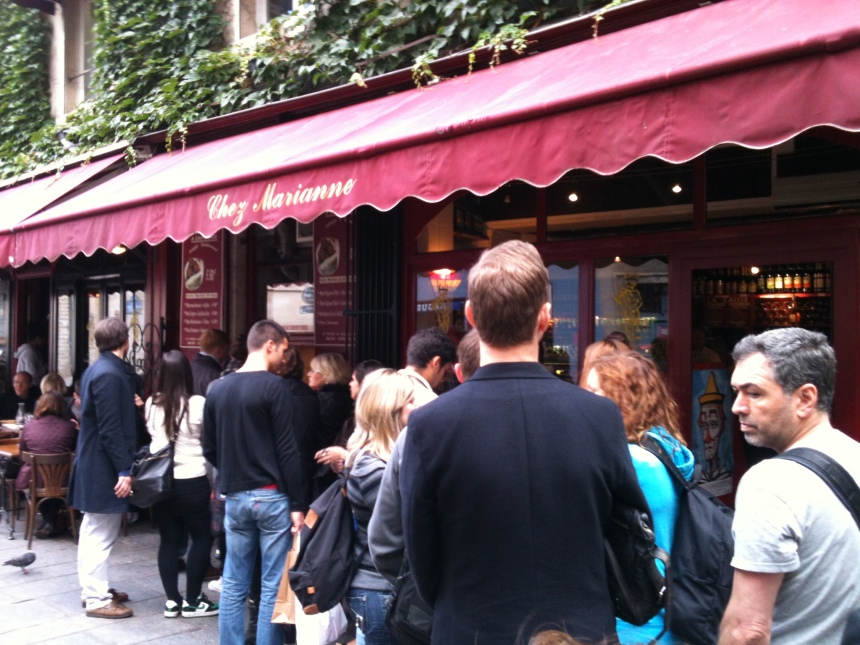 We are in a small falafel shop in the Marais and I run into Michelle Pfeifer?

She was so beautiful, and VERY thin, and wore very dark glasses to be incognito.

After our star spotting we sat on the curb and ate our falafels.

Mine of course got all over me with the sauce covering a majority of my black pants that I have been wearing everywhere.

We left the Marais to get ready for our big night out at Le Showcase.

Le Showcase was highly recommended by everyone I talked with and I had been there when I visited Paris.

It was one of the best nights ever!

After a photo shoot at the Eiffel tower, we walked what seemed like a mile to Le Showcase.

We met up with Ashlee and Nicole and thought the evening was going to run smoothly.

We got to Le Showcase and it was MOBBED.

There must have been 100 people pushing and shoving to get in.

After waiting what seemed like an hour in line, we finally got in. It was as if USC’s coliseum became a club.

After we got dropped off at Villa Bellagio, another scary moment happened to me.

Our hotel was located in an area with bars all around it.

There were always drunk fools wandering the streets and it was always loud.

One night we woke up to a girl screaming help and two men fighting.

I was standing in the doorway trying to get into stupid Villa Bellagio when these two men approach me.

One walks away but the other just stands there looking at me while holding a beer can.

I am literally trapped, while Cammie and Lauren stood to the right on the sidewalk, pounding the door for the bartender to let us in.

The man starts speaking to me in French and refuses to leave after I say “Non Merci.”

He was so disheveled and I was thanking baby jesus that Lauren and Cammie were close by.

His friend turned to Cammie and Lauren and said oh I’ll get my friend sorry if he is bothering you.

When the friend approached me and the drunk disheveled man he just stood staring at me also and starts speaking in French with a scary smile on his face.

It literally felt like I was meat and they were wolves ready to pounce.

I was so scared and just as I thought I was going to have to chitter chop them, someone from our hotel opens in the door.

Great way to end my trip in Paris.