The theme of the trip.

Nobody told me that Miami is Vegas.

Nobody also told me we were going to a strip club.

We were greeted with humidity, wind, and beats when we arrived the Fountainebleu hotel.

I needed to buckle up for bottle service.

For the record- Giggles used to love the clubs.

In fact, I got pneumonia after living my #clubrat life for too long when I was younger. I refer to this as my LILO stage. Which has not been restored since 2013.

We started at Kiki On Then River, which is like the casual outdoor Miami version of Bagatelle.

LILO had been resurrected.

Next on the bachelorette itinerary was the clerb.

To preface this- The majority of the group had not been to Miami.

We entered the club, and I noticed that the girl in front of me was wearing a thong and corset.

I thought, “how desperate” but this is Miami, anything goes.

Then I saw a platform where three girls were topless and in g-strings.

I still didn’t think anything of this, as LILO had been to clubs like this before (#tbt/ #RIP VOYEUR).  It wasn’t until we got to our table upstairs that I realized we were in a legit strip club.

E11even is a strip club.

The group was silent and jaws were dropped.

Was this a mistake? No, it was not.  As soon as the tequila hit the table, we all started guzzling, not knowing really what to do/ where to look.  After three drinks, Everyone forgot about the strippers and just had a good time.

Did I mention Nelly was there?

Another thing about the MIA- the clubs stay open all night. I am usually tucked in by 10pm post pinot with my cat Pico.

How was I going to stay out?

We made it to Malibu Farm and the table was littered with beverages.

You know when you’re really hungover and you don’t know if water, a marg, or coffee will help?

That was the scene Saturday morning.

After having a few jalapeño margs, the group was reignited and off to our next activity of the day- a boat cruise.

I was prepared that this could potentially be a re-enactment of the RHONY Colombia episode, due to the inclement weather in the forecast.

Luckily it wasn’t, and was just a lovely and relaxing tour of Miami. (On brand with my rosé in the sand kind of trip). 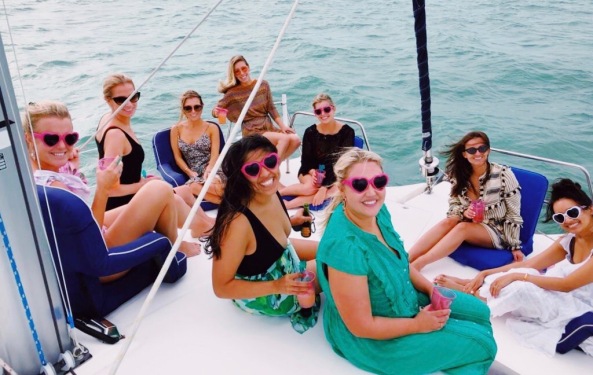 Since this was Vegas, there was no time for naps, and our recharging was dedicated to refueling with overpriced room service.

Since I am not 23 anymore, the marathon of getting ready while still exhausted was challenging, and I would constantly need to start every bar we went to with sparkling water paired with my cocktail.

The plan for dinner was to relax and go to a bar briefly after dinner since it was raining and the group was v tired.

El patio was the bar that we were headed to, which from their website looked like the Miami version of The Bungalow.

Surprise, it was not.

The group seemed hesitant at first, but then became fully immersed in this bailamos fiesta.

Thank you to Sara and ML for planning an incredible Bach for our group and bride. 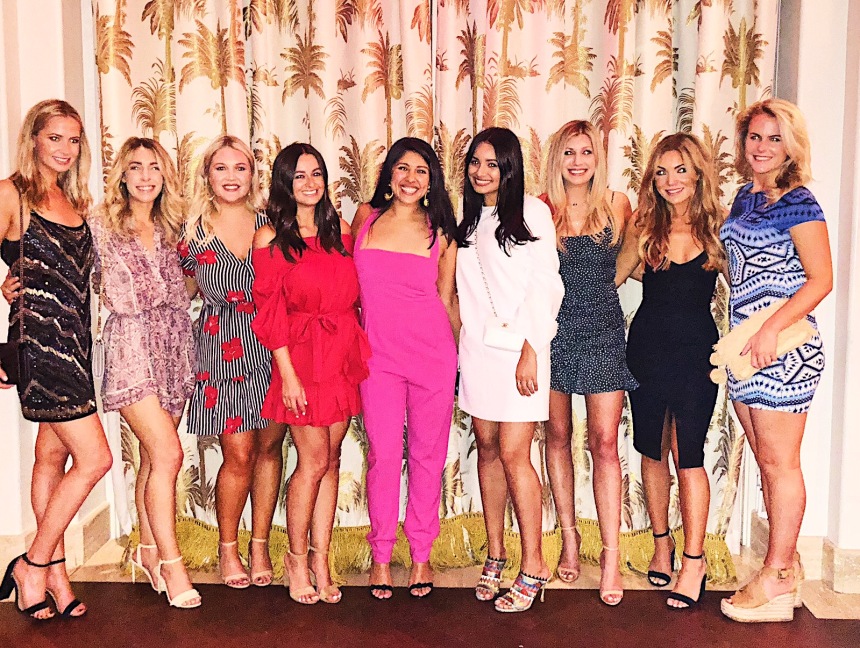