Summer ‘16 and I wake up with a swollen eye.

The aftermath of the luau.

When describing the event-

“My girlfriend throws a luau at her parents house every year, and every year, they say no, and she just says ‘too bad, I’ve already sent out invitations’”.

This is partially true, as my parents were traumatized by the first luau I had the summer after freshman year of college…

AKA when I tried to recreate Fiji Islander in my backyard.

It wasn’t as gritty as that, but there were people tumbling down the stairs, throwing pizza in the pool, and having my parents question sending me to the desert.

I’m being dramatic, but each year, Carms and Hone think the luau is going to be a frat party in their backyard.

This year was tame.

There was a rosé bar, blondies, and a unicorn on Rossmore.

Bailey was low key, and instead of barking at guests, was distracted by eating all of bowls of food set out.

The only dramatic moment was watching a rescue take place at the end of the party. 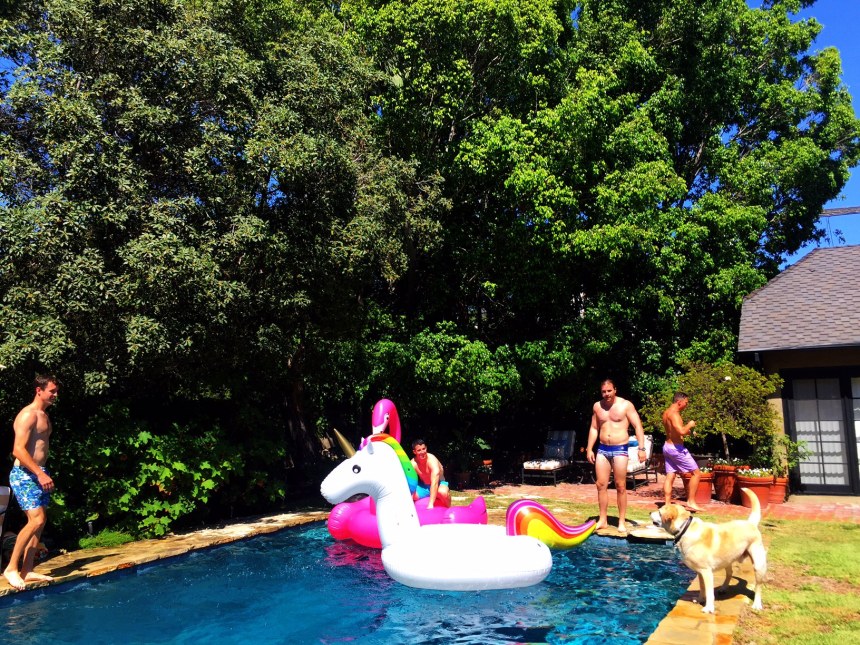 Reminiscing and re-enacting our days in the Hamptons, Jen and I jumped on the pool animals as the party was dwindling down.

Jen somehow broke the neck of the pink flamingo and it rapidly started to deflate, causing Jen to sink in her clothes.

Swiftly, Nick Parazino pulled Jen off of the flamingo, and rescued her from wet cat status.

One of many stars of the luau.

The undercover stars of the party were my boyfriend, Jordan, who refused to engage in driving all around Los Angeles to fuel my need for impulse buying and instant gratification, and instead ordered all the luau materials, like a normal person, the week before.

He also carried in all the ice.

And special thanks to Blair Seward, who is the creative genius behind the Luau Snapchat filter.